How to Reduce Cloud Cost by 99% for EDA Kafka Applications

Learn how to save money on your cloud bill by switching from Kafka to another open-source Java queue implementation.

While the cloud offers great convenience and flexibility, the operational cost for applications deployed in the cloud can sometimes be significant. This article shows a way to substantially reduce operating costs in latency-sensitive Event-Driven Architecture (EDA) Java applications by migrating from Kafka to Chronicle Queue open-source, a more resource-efficient and lower-latency queue implementation.

An EDA application is a distributed application where events (in the form of messages or DTOs) are produced, detected, consumed, and reacted to. Distributed means it might run on different machines or the same machine but in separate processes or threads. The latter concept is used in this article whereby messages are persisted in queues.

Suppose that we have an EDA application with a chain of five services and where we have a requirement that 99.9% of the messages sent from the first producer to the last consumer should have a latency of less than 100 ms at a message rate of 1,000 messages per second.

Figure 1, The five Services and the Benchmark are interconnected by six topics/queues.

The messages used in this article are simple. They contain a long nanosecond timestamp holding the initial timestamp when a message is first posted via topic 0 and an int value that is increased by one each time the message is propagated from one service to the next (this value is not actually used but illustrates a rudimentary service logic). When a message arrives back at the Benchmark thread, the current nano time is compared with the original nano time in the initial message sent on topic 0 to allow the calculation of the total latency across the entire service chain. The latency samples are then subsequently fed into a histogram for later analysis.

The question in this article is: How many instances of these chains can we set up on a given hardware and still meet the latency requirement? Or, to rephrase it, how many of these applications can we run and still pay the same price for the hardware used?

In this article, I have elected to use Apache Kafka because it is one of the most common queue types used in the market. I have also selected Chronicle Queue due to its ability to provide low latency and resource efficiency.

Both Kafka and Chronicle Queue have several configurable options, including replicating data across several servers. In this article, a single non-replicated queue will be used. For performance reasons, the Kafka broker will be run on the same machine as the services, allowing the use of the local loopback network interface.

The Kafka Producer instances are configured to be optimized for low latency (eg setting “acks=1”), and so are the KafkaConsumer instances.

The Chronicle Queue instances are created using the default setup with no explicit optimization. Hence, the more advanced performance features in Chronicle Queue like CPU-core pinning and busy spin-waiting are not used.

In this benchmark, each test instance will create six distinct Kafka topics, and they are named topicXXXX0, topicXXXX1, …, topicXXXX5 where XXXXX is a random number.

In this other benchmark, each test instance will create six Chronicle Queue instances, named topicXXXX0, topicXXXX1, …, topicXXXX5 where XXXXX is a random number.

The inner loops for the two different service thread implementations are shown below. They both poll their input queue until being ordered to shut down and, if there are no messages, they will wait for one-eighth of the expected inter-message time before a new attempt is made.

Here is the code:

Using the record key() to carry an int value might be a bit unorthodox but allows us to improve performance and simplify the code.

The benchmarks had an initial warmup phase during which the JVM’s C2 compiler profiled and compiled code for much better performance. The sampling results from the warmup period were discarded.

More and more test instances were started manually (each with its own five services) until the latency requirements could not be fulfilled anymore. Whilst running the benchmarks, the CPU utilization was also observed for all instances using the “top” command and averaged over a few seconds.

The Kafka broker and the benchmarks were all run using the prefix “taskset -c 2-8” followed by the respective command (eg taskset -c 2-8 mvn exec:[email protected]). The following results were obtained for Kafka:

As can be seen, only one instance of the EDA system could be run simultaneously. Running two instances increased the 99.9-percentile, so it exceeded the limit of 100 ms. The instances and the Kafka broker quickly saturated the available CPU resources.

Here is a snapshot of the output from the “top” command when running two instances and a broker (PID 3132946):

The benchmarks were run using the command “taskset -c 2-8 mvn exec:[email protected]” and the following results were obtained:

The sheer efficiency of Chronicle Queue becomes apparent in these benchmarks when 500 instances can be run simultaneously, meaning we handle 3,000 simultaneous queues and 3,000,000 messages per second on just 7 cores at less than 100 ms delay at the 99.9-percentile.

Here is a chart showing the number of instances vs the 99.9-percentile for the two different queue types (less is better): Chart 1, Shows Instances vs latencies in ms for the 99.9-percentile.

As can be seen, the curve for Kafka goes from 30 ms to 106 ms in just one step so the latency growth for Kafka looks like a wall on this scale.

About four hundred times more applications can be run on the same hardware if a switch is made from Kafka to Chronicle Queue for specific latency-sensitive EDA applications. 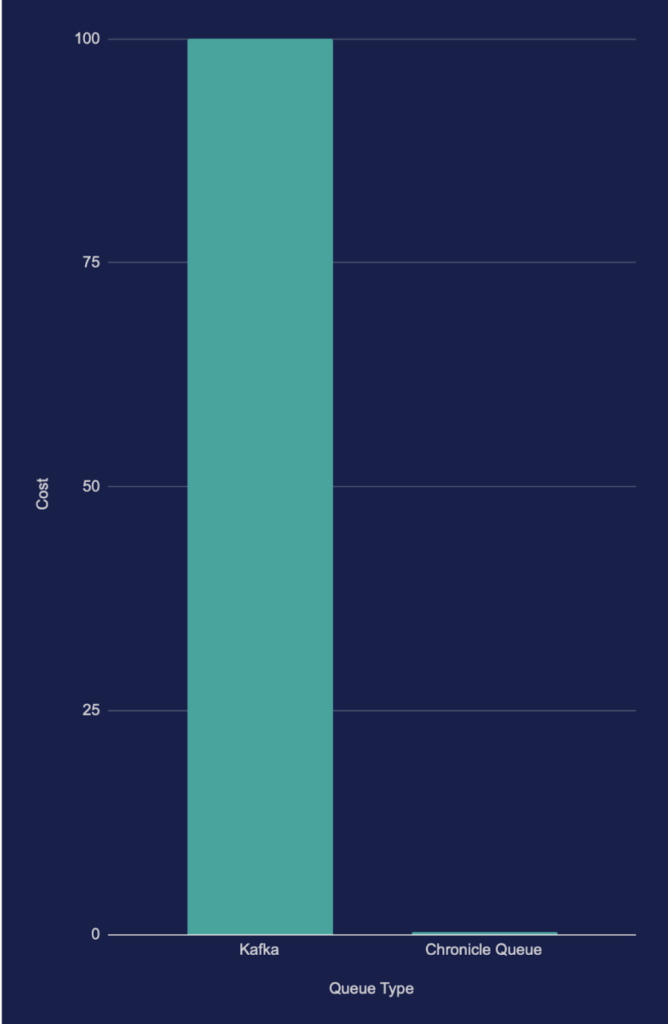 About four hundred times more applications correspond to a potential of reducing cloud or hardware costs by about 99.8% as illustrated in Chart 2 above(less is better). In fact, the cost can barely be seen at all on the scale used.

Services offered by us: https://www.zippyops.com/services

If this seems interesting, please email us at [email protected] for a call.

Cloud Security Testing Checklist: Everything You Need to Know

Is Sustainability the New Security and Compliance?

How to Operationalize a Cloud Security Solution